A Word from Dean Amason 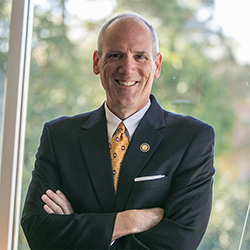 The College of Business has more than 20,000 alumni, and that number grows with each graduating class.  It’s a great group and a source of pride for everyone in our College.  More importantly, it’s a network of professionals, a company of talented and future leaders, who share a love for Georgia Southern and for our College of Business.

Together, our alumni would nearly fill Paulson Stadium, and, through their hard work, they are changing the face of business in our region and beyond.  But they are more than just a legacy of past success.  Our alumni represent a resource for every graduate and an opportunity for each new student.

So, let’s engage this network.  Alumni, reach out to one another, to our students and to our new graduates.  Students, seek out and connect with our alumni.  Let’s support one another, encourage one another, and, when possible, let’s hire one another.  Let’s invest in one another and, together, let’s build the Georgia Southern brand!

Jacob Alves, Jonathan Chambers, Troy Cox, Andres Florido, Adrian Marshall, and Francis Okechukwu make up the team,“Go Local,” named for an innovative mobile app that connects users to local events and venues. The team won first place in the Student Entrepreneur category, the Grand Prize “Overall Winner” award in the Final Pitch category, and the Audience Choice Award. In addition, the team received $2,500 in seed money to aid its start-up company and costs.

“Go Local” was also offered a one year free membership with Georgia Southern University’s City Campus Virtual Business Incubator, a tool to support the start-up company with equipment usage, consulting and access to banks and investors.

“We’re very humbled and honored to be a part of this experience, especially in the student category where we’re just getting started,” said Jonathan Chambers, co-founder of “Go Local” and graduate student. “We really learned quite a bit about what it takes to take an idea from conception to a profit-making company. It’s been an awesome ride. Our team has jived so well together, and we’re going to try to make this happen.”

Originally formed during the Georgia Southern University 3 Day Startup (3DS) Program in February, the “Go Local” team was chosen by the 3DS panelists, which secured their application acceptance in the FastPitch competition.

Dominique Halaby, director of the Bureau of Business Research and Economic Development, says, “With continued dedication and support, we will keep building an ecosystem and culture where innovation is rewarded, entrepreneurship is celebrated and jobs are created.”

Accustomed to helping clients through life changes, economic changes, market shifts, and family cycles, Alan plays a key role in the lives of his clients. Starting his career with Dean Witter/Morgan Stanley Group in 1984, Alan eventually moved on to Merrill Lynch, and joined Wells Fargo Advisors in 2011. Sharing the Wells Fargo Advisors philosophy of always putting the client’s needs first, Alan serves the Savannah and South Carolina Lowcountry area at the highest level of professionalism and customer service.

Alan is a native of Savannah and is proud to serve his friends and neighbors in the South Georgia and the South Carolina Lowcountry area. He and his wife, Rhonda, have raised two daughters in the Savannah community, and enjoy being members of the Wilmington Island Club, the Savannah Yacht Club, and St. James Catholic Church. In his spare time, Alan enjoys golfing and spending time relaxing on Tybee Island.

The Georgia Southern University Center for Forensic Studies in Accounting and Business hosted its 11th Annual Forensic Accounting Lecture Series on March 11 from 5:00-6:30 pm at the Performing Arts Center (PAC). This year’s address was presented by Jason Moran, special agent in charge for the Federal Deposit Insurance Corporation, Office of Inspector General.

The Forensic Accounting Lecture Series supports the Fraud Examination and the Forensic Accounting programs in the College of Business School of Accountancy. These programs integrate the accounting, auditing, and investigative skills used to yield analyses and results suitable for use by the courts as the basis for resolution and focus on providing students with intensive fraud prevention and detection training.

Jason Moran has more than twenty-two years of experience in the Inspector General community investigating many types of white collar crimes. He started his career as an auditor with the United States Department of Interior in Washington, D.C., and later worked with the United States Department of Education in Atlanta, Georgia. Mr. Moran grew up in Coastal Georgia and obtained a BBA in finance from Georgia Southern and an MS in administration from Central Michigan University. He currently resides in metro Atlanta with his wife, Chanda, and their two children, Keyra (15) and Jason II (12). Mr. Moran is a member of the Forensic Accounting Advisory Board.

Isaac Mentouri left Georgia in October 2013 to teach English in China for 12 months. He found this opportunity to travel and teach abroad through the Georgia Southern Career Services’ Eagle Career Net. Through the Ameson Year in China program, Isaac has done some volunteer work taking extra time to teach English to his students through a weekly program called “English Corner,” practiced his Chinese language skills since there are no other foreign teachers placed with him and he’s in a very rural part of Shanghai in which there are no English speakers, participated in a cultural exchange where he’s had to completely immerse himself in the Chinese culture, and taught English six days per week.

Isaac states, “I am teaching overseas because I have a passion for teaching and wanted to try something different by being in a new culture.” He received his MED in higher education administration in 2012, and a BA in general studies with a minor in business in 2009. During his last year of graduate school, Isaac worked as a graduate assistant in the School of Economic Development. Isaac has recently entered a photo essay contest through the Ameson program. Please take a look at his blog on China and the Ameson Year in China program, “From Sweet Teat to Green Tea,” at https://basicfront.easypromosapp.com/voteme/127885/624303178 and vote for his photo essay.

Georgia Southern University has announced its 2014 Southern’s Orientation, Advisement, and Registration (SOAR) Team. SOAR Leaders help orient new students and their families to Georgia Southern during the summer SOAR sessions by serving as role models for new students, helping them register for classes, preparing them for college level academics, and informing parents about Georgia Southern services. One-hundred thirty-nine students applied for the coveted SOAR Leader positions and 24 were selected based upon their leadership potential, work ethic, and ability to represent the university.

Jacoby Carpenter, a senior management major from Waynesboro, Sarah Brittany Sandbach, a senior early childhood education major from Augusta, and Carrie West, a junior early childhood education major from Douglasville, are returning for their second year as SOAR Leaders. They helped select the 2014 SOAR Team, which represents more than 35 campus organizations, by trying to find the best individuals to represent the Georgia Southern student body.

Jacoby Carpenter said, “My first experience as a SOAR Leader in 2013 was life-changing. As I welcomed incoming students over the summer, helping them transition to college, my fellow SOAR Leaders quickly became family. As a returning SOAR Leader, there is a lot more responsibility, all benefitting my professional development. I decided to embark on this experience once again with hopes of creating the same life-changing experiences for the 2014 team that I received last year. Being in this role is such a blessing. I have the opportunity to change the lives of incoming students all while witnessing my own life-changing experiences along the way. This is why I enjoy being a SOAR Leader, and I wouldn’t change it for anything in the world.”

The College of Business hosted three honorary members of the Parliament of Ghana on campus this week as part of an organized training tour studying democratic governance in the Georgia Assembly and other state institutions.

The team traveled to the United States specifically to learn from Georgia institutions about oversight, ethics, and accountability in government operations.  In addition to touring the Georgia Southern campus, the delegation also met with Provost Jean Bartels, representatives from the Office of International Programs, and Statesboro Mayor Jan Moore.

“The most interesting thing so far that we have seen is how this area is a University community. In Ghana, we don’t have such a thing. We are a new democracy,” said Akrofi-Tibo.

“We are here to learn about your institution and what makes your government and democracy work. Everyone is looking up to America, and we want to learn and also improve upon our working parliament,” said Bedzrah.

“I’m impressed by the number of programs offered and the volume of students at Georgia Southern University. International students, including African students, come here from all over the world. When I get back to Ghana, I will encourage more and more people to come and learn here,” said O.K. Bless.

The nation of Ghana has demonstrated keen interest in advancing democratic principles in its development strategies.  It is often referred to as the torchbearer of African democracy.  As a result, the nation was rewarded by President Obama in July 2009 with his first visit to a Sub-Saharan African nation as President.

Following the visit to Statesboro, the Ghanaian delegation will travel to The University of Georgia’s Carl Vinson Institute of Government for further training and then proceed to Atlanta to the Georgia Assembly and related institutions.

-Thanks from the Office of Marketing & Media, College of Business