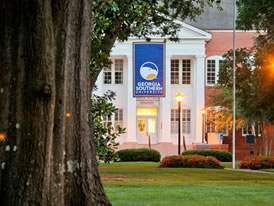 Georgia Southern University’s latest Economic Monitor, which analyzes data and identifies trends affecting the regional economy, reports that the Savannah metro economy ticked up modestly despite Winter Storm Grayson, which blanketed the area in heavy snow and ice fall in early January. Indicators of economic conditions were slightly mixed due to the weather-related incidents, however, […]

In mid-March, the Bureau of Business Research and Economic Development (BBRED) delivered a retail gap analysis to the City of McRae-Helena. This report identified potential industries in the retail market that are ready for expansion. To find these industries, the research team examined both demographic and consumer spending data using several defined areas around and […]

The Economic Development Journal featured an article about GENIE in their fall publication. The article, written by Dr. Dominique Halaby, highlighted how the virtual incubator component is helping businesses in rural counties around the region. Rural Entrepreneurship as an Economic Development Strategy: The Case of NAFTA Impacted Counties in Georgia by Dominique Halaby In order […]

At the request of the Hinesville Development Authority (HDA), the Bureau of Business Research and Economic Development (BBRED) conducted an economic impact analysis on a new shopping center development planning to locate in Hinesville. This report examined the economic impact of building and operating this facility. The analysis found that this project will have a […]

Thanks to our Partners…